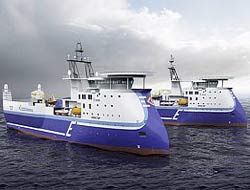 Eidesvik has ordered two large, state-of-the-art seismic vessels of the type ULSTEIN SX120 from Ulstein Verft. The ships will be delivered in spring 2010. The contract’s total value is about NOK 1.3 billion.

Eidesvik has ordered two large, state-of-the-art seismic vessels of the type ULSTEIN SX120 from Ulstein Verft. The ships will be delivered in spring 2010. The contract"s total value is about NOK 1.3 billion.

“We"re very happy that Eidesvik chose Ulstein again. The contract with Eidesvik has strengthened our position in the seismic market - a market that is highly interesting and important,” says Gunvor Ulstein, CEO of the Ulstein Group

Eidesvik is known for innovation and a green profile. The ships that Eidesvik has ordered will be contracted by the world"s largest seismic company, the merged CGG-Veritas. “All but one of our seismic vessels will be sailing on long-term charters with that company,” says Jan Fredrik Meling, Eidesvik"s Managing Director. “This fall we"ll have six seismic vessels in service, and the Ulstein ships come as an addition to those,” he says.

“With this contract, we establish a long-term commitment and co-operation with an exciting ship owner. Establishing long-term customer relations is important to Ulstein, as it enables us to develop new advanced vessels with innovative solutions. Further, this secures employment of our workers”, says deputy managing director of Ulstein Verft, Harald Møller.

“The ships are gentle on both the external environment and the working environment onboard. We believe the ULSTEIN X-BOW® "s smooth and gentle motion in heavy sea makes it highly suitable for seismic operations,” says Meling. “The bow also helps reduce fuel consumption, which means less pollution. The ships are classified as Clean Designs, meaning they have a double hull and control of operational emissions. We focus on buying the best in the market, and well-being is important. Less noise and hull motion make it more comfortable for the crew. We also maintain a high standard in the day room and have installed an Internet café and a large conference room. ULSTEIN SX120 accommodates 70 persons of which 50 in single cabins,” he says.

“Physically separate engine and propulsion rooms provide redundant propulsion. This means flexibility in maintenance and more operating time for the ship,” says Meling. He adds: “The ships are amongst other classified with NAUT AW class, which means a high standard for safe navigation and view from the bridge, as well as system redundancy and particular requirements for user interface in technical equipment.”

In oceanic seismic surveys, the sea bottom is examined with shock waves in the search for gas or oil reservoirs. The seismic ships are equipped with 20 streamer winches with 18 corresponding towing points, and the streamer winches detect signals from the seismic waves. The ships will be among the world"s largest of their kind, with a length of 106 meters and a maximum width of 28 meters.

Comprehensive design and electrical system deliveries
Ulstein Design will deliver the design and Ulstein Elektro the comprehensive electrical installations and systems. “The contract is important for the entire Ulstein Group and will involve employees at all levels,” says Gunvor Ulstein.

The Ulstein Group"s order reserve is now at NOK 6.3 billion.