Eitzen was hit by the global crisis 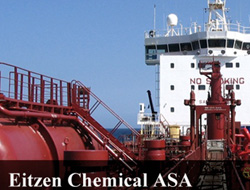 The specialist and parcel tanker specialist reported a $192.4 million net loss for 2008 and said at the end of last year that it was in breach of a covenant.

A new loan agreement was sought for with its lenders, a deal which could give Eitzen more flexibility on repayment terms.

?All three bank syndicates have now approved the request and the company has consequently rectified the breach of covenant it reported last quarter,? Eitzen wrote in a statement to the Oslo Stock Exchange on Thursday.

Eitzen, which owns 69 of the 95 vessels in its fleet, was hit by the global economic downturn which drastically dropped asset values.

Reports said its fleet lost 20% of its value in the second half of 2008 leading it to book an impairment charge of $156.2 million in the fourth quarter alone. Over the course of the whole year impairment charges reached $160 million.

Eitzen has warned its investors of ?challenging market conditions? ahead and a ?weak market? for the whole year.

This news is a total 1022 time has been read