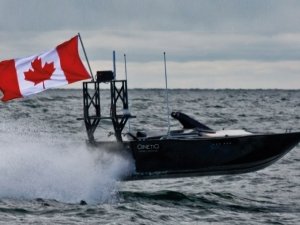 Designed to address the requirements of the Naval Electronic Attack Recapitalization - Unmanned (NEAR-U) project, NOMAD is an offboard active decoy using the Humpback variant of QinetiQ Target Systems' Hammerhead unmanned surface vessel (USV) as a payload carrier. Rheinmetall Canada was awarded a CAN4.5 million contract to lead the NOMAD effort in May this year.

One of a number of initiatives intended to recapitalise the RCN's electronic attack capability, the goal of NEAR-U project is to implement and test a potential solution to improve naval platform survivability by incorporating a NOMAD system into an existing RCN USV platform.

With more than 40 years of experience, Elbit Systems EW and SIGINT-Elisra is one of the world’s leading providers of battle-proven Electronic Warfare (EW) solutions for naval, airborne and land applications. The company is the EW house of the Israeli Navy and is constantly perfecting the system's capabilities to meet the new challenges of the modern battlefield.

This news is a total 295 time has been read
Tags: Canadian Navy’s, Elbit System, project, NOMAD