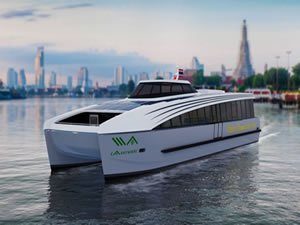 Thai alternative power company Energy Absolute is launching a fleet of new battery-electric passenger ferries on Bangkok's Chao Phraya river, part of a plan to cut the city's air pollution and improve its image for visitors.

"If we can prove that it works, I think there is a huge market, not only in Thailand but for export also," CEO Somphote Ahunai told Nikkei Asia.

A division of the Bangkok Metropolitan Authority introduced two all-electric boats this July, but the majority of the city's busy passenger-vessel fleet is diesel-powered. The agency would prefer to see it all transition to electric operation in order to reduce pollution. With the introduction of 27 all-electric vessels by Energy Absolute, this goal will be considerably closer.

According to the advocacy group Climate and Clean Air Coalition, lightly-regulated diesel emissions rank among the main causes of pollution in Bangkok, along with periodic agricultural burning from outside the city. Electricification would reduce local black carbon emissions within the city itself. The effort might not be emissions-free, as 80 percent of Thailand's electrical power comes from natural gas and coal.

Cost is a factor in the electrification initiative. A new all-electric passenger boat will cost Energy Absolute about $1 million to build in-house, including high-end components like 250-horsepower Danfoss Editron electric motors. All told, Energy Absolute expects to invest $33 million in the project, including charging stations for the vessels.

Two ferries are currently in testing, and once they have completed trials, the remainder of the fleet will be rolled out over the span of 2021. According to Danfoss, hotels and real estate developers have shown interest in the fully-electric catamaran design to provide transport to luxury developments along the riverside.

Energy Absolute's business interests extend well beyond waterborne transit. It operates several solar and wind power plants, and it is planning its own battery manufacturing plant to supply its own new electric cars. It is also building out a network of EV charging stations for the Thai market.

This news is a total 2178 time has been read
Tags: Electric Ferries May Become a Major Force on Bangkok's Busy Rivers