EMES adds Akport to its port of call 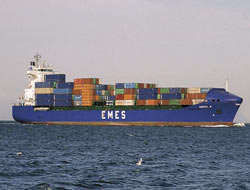 Tekirda??s Akport Port now has access to its first regular container line. In April, Arkas? shipping company EMES added the port of Tekirda? to its services to the Black Sea and Spain.

EMES adds Akport to its ports of call

Tekirda?"s Akport Port now has access to its first regular container line. In April, Arkas" shipping company EMES added the port of Tekirda? to its services to the Black Sea and Spain.

Exporters in the region of Thrace had been sending cargo to Istanbul in order to take advantage of regular container lines. EMES now offers a key solution to a problem that was increasing shipping costs for Thracian manufacturers. Two lines from EMES started calling at Tekirda? port making it possible for containers to be shipped via sea from this province as well as from industries in neighboring cities like Çorlu, Lüleburgaz and Çerkezköy. Industries in Thrace will be able to export goods via weekly services to Romania/Bulgaria and Spain.

EMES" Romania/Bulgaria service that calls at Tekirda? has the following route: Constanta-Varna-Marport-Tekirda?-Constanta. Service to Spain has the following ports of call: Valencia-Castellon-Barcelona-Kavala-Tekirda?-Marport-Haydarpa?a-Izmir-Valencia.

Tekirda? will be a transit center

Tekirda? Akport Port is an important port of call because of its location on the Sea of Marmara. Tekirda? will also be connected to Muratl? via rail with a line that is slated for completion at the end of 2008. Because the Gebze-Haydarpa?a and Sirkeci-Halkal? lines will be closed due to construction on the Marmaray Project, railway service to Europe will continue by ferrying rail cars from Tekirda? to Derince and Band?rma. As a result, Tekirda? Akport Port will become an important transfer center for shipments to and from Europe.

EMES is leveraging Arkas" 64 years of experience in the international transport industry to provide service to ports in the Mediterranean and Black Seas. There are a total of 25 vessels in the EMES fleet, including some vessels that belong to Arkas. Because EMES operates Turkish-flag ships, it is able to reliably ship containers between Turkish ports without being limited by coastal trade laws.

EMES continues to make the necessary investments in the container industry and has an approximately 54,000 TEU container park that is equipped special types of containers including ?open top?, ?high cube?, ?flat rack?, ?palletwide? and ?reefer? containers.

This news is a total 8411 time has been read