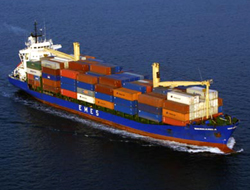 EMES has begun service to Lebanon which primarily satisfies its need for products via imports.

EMES has begun service to Lebanon which primarily satisfies its need for products via imports.

EMES, which provides regular weekly carrier service between ports on the Black Sea and Mediterranean has begun service to Lebanon which primarily satisfies its need for products via imports. The needs of industrialists who wish to take advantage of the expanding market in Lebanon are being met by the EMES service to Beirut.

To meet rising import and export demands, beginning in March, EMES, which has a container park of 55,000 TEU and provides regular line transportation with a fleet of 25 vessels, has begun serving Beirut. The EMES Beirut service route is: Marport (Istanbul)-Haydarpa?a-Gemlik-?zmir-Tartus(optional)-Mersin-Lattakia-Beirut-Alexandria-Piraeus-Marport. Transit time for this service is seven days from Istanbul and 5 days from Izmir, thus providing an important alternative for industrialists who want to export from Istanbul, Bursa, Mersin and Izmir. As the economy of the country becomes more and more developed, the demand for transport to the country from around the world is increasing. EMES can also load cargo bound for Lebanon from Europe and the Eastern Mediterranean. The route from Spain to the Eastern Mediterranean is Castellon-Barcelona-Alexandria-Beirut-Lattakia and runs once every 15 days.

The largest warehouse in the Middle East

Beirut, the capital of Lebanon, which imports most of the products that it needs, has the largest warehouse in the Middle East with its free port zone. Turkey has taken its share of the developing Lebanese market with exports of petrol and petroleum products, ready-to-wear garments, machines and transport vehicles, textiles, grains and grain products, chemicals, fruits, vegetables and vegetable products, iron and steel, automotive products and metal goods. This is proven by the fact that in 2008, 664 million dollars worth of products were exported to Lebanon, while 178 million dollars worth of goods were imported from there.