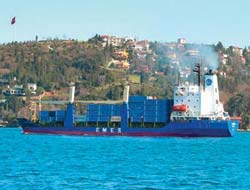 With the new, direct, two-way service it initiated from Izmir to Romania in January of 2007, EMES aims to provide door-to-door delivery.

With the new, direct, two-way service it initiated from Izmir to Romania in January of 2007, EMES aims to provide door-to-door delivery.

As a result of the fact that trade relations between Romania and Turkey have gained momentum, EMES initiated a direct service from Izmir to Romania and from Romania back to Izmir in January of 2007.

Transit time on the service is 6 days and the goal is to provide door-to-door delivery particularly for exports.

Containers are discharged in the port of Constanta and delivered to their final destination via truck. Because these intermodal sea-land shipments are less expensive, it provides customers with an important competitive advantage. Romar Shipping, EMES" Romanian agency, handles all types of transit procedures in Romania.

With the second largest market potential in Central Europe, Romania is located at the crossroads of trade centers and routes spanning 1000 km and reaching over 200 million consumers. It plays an important role because of its proximity to the countries in the East, Middle East and Commonwealth of Independent States (CIS).

The Port of Constanta is the largest port on the Black Sea and opens up new routes from the Black Sea to the North Sea via the Rhine-Main-Danube waterway, thereby making it very important for Turkey.

This news is a total 1721 time has been read