Emission are as low as possible 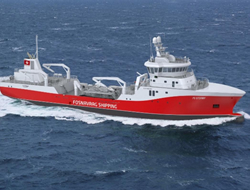 The hull of Havyard Ship Technologys newbuild number 117, a Havyard 587 wellboat for the shipping company Fosnavaag Shipping, has arrived at the shipyard in Leirvik and is facing a hectic period of outfitting and testing.

In August 2012, Havyard agreed a contract with Fosnavaag Shipping for the construction of the world`s most efficient and environmentally friendly wellboat. The Havyard 587 design was developed in close cooperation with ship owner and key suppliers of vital systems onboard.The hull of the ship has been constructed at the Cemre shipyard in Turkey, where Havyard constructs most hulls for their newbuilds.

The hull arrived last week at Havyard`s own shipyard in Leirvik in Sogn, Norway, where completion of the outfitting and testing will take place. Jobjørn Løland, Project Manager for newbuild 117 at the Leirvik shipyardsaid that there was close cooperation with the site-team in and that there were quite a few trips to Turkey in the early project phase.“It is important to follow up on the progress there. In the project organization we have experts in every special field, and as the hull nears completion, the production organization in Leirvik becomes more and more involved,” he continued.

The newbuild went straight into dock as it arrived at the shipyard and according to plan it will remain there until the end of February. Also the main engines will be started up while in dock.“The largest pipes have been assembled in Turkey but all installations of machines and engines, outfitting and accommodation will be performed in Leirvik, in addition to painting and start-up,” Løland pointed out. Havyard 587 contains the best within wellboat technology, setting a new standard for environmentally friendly and gentle transport and treatment of live fish.

“Cylindrical cargo tanks and the efficient filter- and water treatment equipment make it possible to perform a closed transport across far longer distances compared to existing boats,” says Olav Remøy, CEO of Fosnavaag Shipping. ” This makes greater density of fish possible with a more gentle treatment of the live fish leading to better quality of the end product. There has also been put great emphasis on the hull and propulsion machinery to be as efficient as possible in real operating conditions, so that fuel economy is the best possible and that emissions are as low as possible.”

This news is a total 1576 time has been read