Employers and unions unit for fair 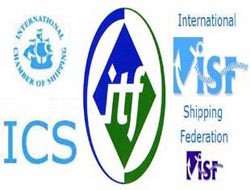 EMPLOYERS AND UNIONS UNITE FOR FAIR TREATMENT FOR SEAFARERS

The three organisations, which represent maritime employers and trade unions worldwide, announced today in London that they have united to support and promote the IMO and ILO Guidelines on the Fair Treatment of Seafarers In The Event Of A Maritime Accident.

As part of the campaign the three organisations are distributing posters (supported by websites and leaflets) worldwide to show seafarers how the Guidelines can help protect them. They are also encouraging their members - national shipowners" associations belonging to the ISF and ICS, and seafarers" unions affiliated to the ITF - to approach their governments in order to promote the Guidelines and to monitor how effectively they are being implemented.

ISF/ICS Secretary General, Tony Mason explained: ?As responsible employers, we believe its is very important that the IMO/ILO Guidelines, which represent the internationally accepted minimum standard for the fair treatment of seafarers by investigating authorities, are indeed implemented in practice by governments. Seafarers must be treated with dignity and respect, and given access to independent legal representation in situations where they may be interviewed or held following an accident at sea.?

ITF General Secretary, David Cockroft, remarked: ?The knee-jerk scapegoating of seafarers following accidents at sea is a growing concern to us all. In recent years the response of too many national authorities has been to reach for the handcuffs first and find out what actually happened last. Incidents like these prove how vital the Guidelines are. I"m proud to say that the ITF and ISF in their capacity as ILO "social partners", with support from ICS and other industry organisations, helped to develop these Guidelines, which were the product of tripartite negotiations with governments prior to their agreement by IMO and ILO.?

Speaking at a press conference to launch the joint effort the two men displayed the Maritime Accidents. Seafarers ? Be Aware! posters that the organisations are distributing for use on ships, in seafarers" missions and in other locations around the world. These can also be downloaded from either www.marisec.org/fairtreatment or www.itfglobal.org/fairtreatment , where the IMO/ILO Guidelines also appear in full.

This news is a total 1487 time has been read