End of the Greenpeace Disput 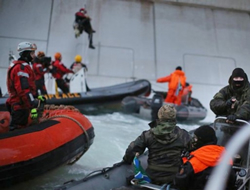 Russia is showing political will to end a two-month-long dispute over the prosecution of Greenpeace activists after they began to be set free on bail, President Vladimir Putins human rights adviser said.

The legal moves have the potential to defuse a dispute that has pitted the world’s biggest energy exporter against the environmental organization after Russia detained 30 people for participating in a Greenpeace protest at an OAO Gazprom offshore oil platform in September. Russian authorities last week transferred 28 Greenpeace activists and two journalists from 18 countries to St. Petersburg from the port city of Murmansk, easing consular access to them.

Russia has faced worldwide protests and a legal claim from the Netherlands since it impounded Greenpeace’s ship and charged the campaigners with piracy, which is punishable by as long as 15 years in prison. Prosecutors then cut the charges to hooliganism, which carries a maximum sentence of seven years.

The Brazilian was the first foreigner to be let out of prison following the release of three Russians: doctor Ekaterina Zaspa, photographer Denis Sinyakov and activist Andrey Allakhverdov. Another court in Russia’s second-largest city yesterday extended the detention of Australian Colin Russell by an additional three months.

St. Petersburg courts will decide in the coming days whether to grant bail in the remaining 25 cases. A Pole was also due to have his hearing today, according to Greenpeace.

Fedotov’s presidential human rights council last week asked the Investigative Committee to set free all 30 people on bail and is calling for the criminal charges to be dropped.

“Legally, the current situation is absolutely unfounded,” said the Putin adviser. “We need to get out of this impasse through diplomatic means and I have explained this to top Russian officials and ambassadors of foreign countries.”

The affair has provoked a diplomatic dispute with the Netherlands, which is suing Russia to force it to release the crew and Greenpeace’s Dutch-registered Arctic Sunrise ship.

Greenpeace has vowed to target Gazprom and its partners. The Russian state gas exporter provides a quarter of Europe’s gas, including to companies such as Eni and Germany’s RWE AG.

Gazprom plans to become the first Russian company to start producing oil in the Arctic offshore as soon as this year. Greenpeace activists scaled the same platform in 2012.

www.turkishmaritime.com.tr
This news is a total 1450 time has been read