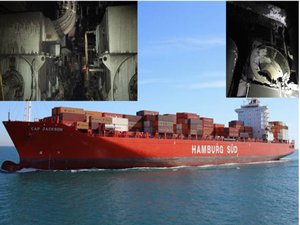 The Panamax containership Cap Jackson reported a fire in the auxiliary engine room early July 29, 2020, while getting ready to transit Panama Canal.

The crew members are reported to be safe and there have been no injuries reported.

The crew is checking temperatures of all areas and are continuously monitoring the situation.

The 4,600 TEU vessel, built in 2010, is at the port of Balboa, while a repair plan and contingency measures are being reviewed.

The Singapore-flagged ship is serving in the Mediterranean Pacific Service (MPS), connecting Mediterranean ports to the US and Canadian West Coast.

“We would like to inform you that our partner Maersk reported that no cargo damages have been detected caused by the incident,” Hapag-Lloyd said in a customer advisory.

The ship is owned by Germany’s container shipping firm Hamburg Süd, acquired by Maersk in 2017.

This news is a total 2702 time has been read
Tags: Cap Jackson , fire , Hamburg Süd , Maersk