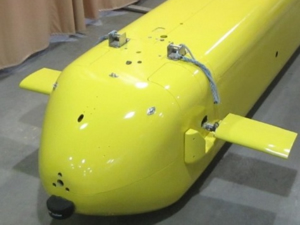 On Monday, electrical engineer Jared Dylan Sparks, 35, was convicted on charges of stealing secrets related to a drone prototype that his employer was building for the U.S. Navy's Office of Naval Research.

On Monday, electrical engineer Jared Dylan Sparks, 35, was convicted on charges of stealing secrets related to a drone prototype that his employer was building for the U.S. Navy's Office of Naval Research.

According to the Justice Department, Sparks stole accounting and engineering files from defense contractor LBI Incorporated. At the time of Sparks' employment, LBI held Navy contracts to develop the Low Visibility Craft (LVC) and two versions of the Large Displacement Unmanned Underwater Vehicle (LDUUV) for the Office of Naval Research. Sparks was assigned to work on the propulsion and signaling components for these projects, and was involved in reviewing drawings, creating specifications and conducting testing for both. As part of his work, he collaborated with software company Charles River Analytics (CRA), which developed code for the drones.

In 2011, CRA began discussions with the Navy to take over testing of the integration of its software with LBI's equipment, expanding its scope of work into the area of hardware. At this time, Sparks began to consider moving over to Charles River. He accepted a new position at CRA in January 2012, at about the same time that CRA won an ONR testing contract for LBI's drone submersible prototypes. However, before leaving LBI, he transferred thousands of sensitive files - accounting and engineering documents, photographs of designs, renderings used in manufacturing and other materials - from his employer's network to his personal Dropbox cloud storage account.

“Jared Sparks stole thousands of documents—including proprietary designs and renderings—from his former employer when he left to work for a competitor,” said Acting Assistant Attorney General John P. Cronan.  “Yesterday’s verdict sends a clear message that the Department of Justice is committed to protecting American intellectual property and will aggressively prosecute those who steal it.”

Jay Williams, a former technician at LBI who took a position at CRA at the same time as Sparks, was found not guilty of related charges.

This news is a total 646 time has been read
Tags: Engineer Convicted of Stealing Secrets from U.S. Navy Contractor