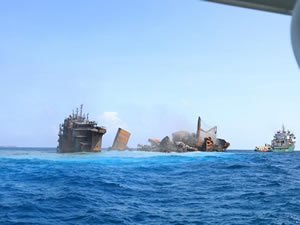 Contaminants released from the wreckage of a container ship off the coast of Sri Lanka could be dragged thousands of kilometers by ocean currents, impacting wildlife and humans in far-reaching latitudes.

Authorities and salvage crews are now working to prevent the more than 300 metric tons of oil transported by the MV X-Press Pearl from spilling out of the ship’s fire-damaged hull.

But significant damage has already been done. Chemicals and tiny plastic pellets that were once onboard the 186-meter vessel have already entered the ocean, causing one of Sri Lanka’s worst environmental disasters to date.

“Oil, chemicals and plastic pellets are probably the worst combination you can have,” said Delphine Lobelle, a postdoctoral researcher specializing in ocean plastics at Utrecht University in the Netherlands.

“It’s really unfortunate that the ship was carrying so many harmful materials.” Millions of plastic pellets have washed up on Sri Lanka’s southwestern coast, a tourist destination famous for its golden-sand beaches, fringed by palm trees and coconut groves.

Images from the beaches in Colombo, Sri Lanka’s capital, show the sand covered in a layer of white plastic pellets and people in blue scrubs and white boots shoveling them in bags.

Pellets the size of a grain of rice can easily be mistaken for food by birds or fish, Lobelle said, but consuming them can be deadly.

If the animals don’t die and are instead eaten by predators, the plastics can move up the food chain until they eventually reach humans. With time, the pellets break into even smaller pieces, known as microplastics, which are even more difficult to detect and control.

“The real danger of having plastic on a beach is if it’s brought back into the ocean by tides,” Lobelle said. “If it moves further offshore then it’s impossible to clean up.

Currents spread plastic everywhere and there’s no way to collect it.” The ship was carrying 1,486 containers holding chemicals such as nitric acid, a highly corrosive mineral acid, methanol, sodium hydroxide and about 400 containers of small plastic pellets known as nurdles, according to ITOPF, a nonprofit set up by the shipping industry that’s assisting the Sri Lankan government in the emergency response to the incident.

How many pellet containers have either burned or fallen off the ship isn’t clear, said ITOPF’s technical director Richard Johnson.

At least four containers have washed ashore and many more are thought to have sunk. About 1,000 people are participating in cleanup efforts, Johnson said, with the rest of the city under a strict lockdown to prevent the spread of coronavirus.

About 11 million metric tons of plastic find their way into oceans every year, causing damage to wildlife habitats, humans and animals, according to a report on ocean pollution last year.

If no action is taken, plastic litter will almost triple by 2040 as humanity increases the use of hydrocarbon-based plastics, which don’t degrade naturally.

The cumulative amount of plastic in the ocean could reach 600 million tons in 20 years’ time. Studies done by Ifremer, the French institute for research and exploitation of the seas, show that fish can actually expel small pieces of virgin plastic like the ones in the Sri Lanka shipwreck, according to project manager François Galgani. If local bacteria and plankton get stuck in the plastic and wash up in other countries and continents, it can disrupt existing ecosystems.

That phenomenon occurred in the aftermath of the Fukushima disaster in Japan, said Galgani, who also advises the International Maritime Organization on shipping-related environmental issues. Some potential damage can be avoided by loading pellets at deck level or below instead of on top, according to Galgani.

But ship owners tend to put these containers on top because they’re the cheapest load, and they leave the most expensive goods at the bottom.

“We know that certain ship owners load ships with more containers than they should,” Galgani said. “Then captains throw the containers on top off board because they can endanger the safety of the whole ship.”

Even if authorities manage to seal the oil containers aboard the X-Press Pearl, the fuel will remain at the bottom of the ocean and could start leaking any time.

“Maybe a black tide doesn’t touch the Sri Lankan coast in the next days or months,” Galgani said.

Even if it looks like the problem is fixed today, it’s just pollution being delayed through time.”