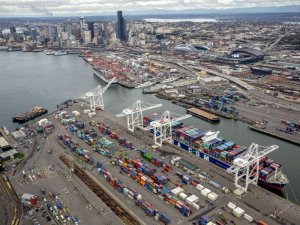 While new tugs and workboats are beginning to incorporate new clean-burning, EPA-compliant

With support from grants and rebates funded through the Diesel Engine Reduction Act (DERA), the National Clean Diesel Program, tug and workboat operators can replace those legacy engines with modern, clean-burning diesel technology.

The EPA recently provided $650,000 to the Puget Sound Clean Air Agency (PSCAA) to reduce harmful diesel emissions from engines on up to eight vessels operating in the Puget Sound region near Seattle.

The project will reduce lifetime emissions of:

Part of the National Clean Diesel Campaign, the West Coast Collaborative is a partnership among federal, state, and local governments, the private sector, and environmental groups committed to reducing diesel emissions along the West Coast. Partners come from all over Western North America, including California, Oregon, Washington, Alaska, Arizona, Idaho, Nevada, Hawaii, Canada and Mexico.

This news is a total 484 time has been read
Tags: EPA supports cleaning up diesel emissions in Puget Sound