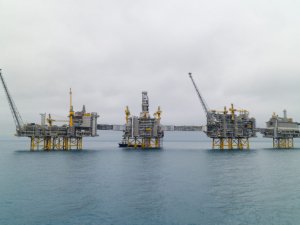 Sanctioned in 2015, Johan Sverdrup is the largest development on the Norwegian Continental Shelf in three decades. Johan Sverdrup has expected recoverable reserves of 2.7 billion barrels of oil equivalent and the full field can produce up to 660,000 barrels of oil per day at its peak. The field is also powered by electricity from shore, making for record-low CO2 emissions of below 1 kg per barrel, according to Equinor.

“Johan Sverdrup coming on stream is a momentous occasion for Equinor, our partners and suppliers. At peak, this field will account for around one third of all oil production in Norway and deliver very valuable barrels with record low emissions. Johan Sverdrup is expected to generate income from production of more than NOK 1400 billion of which more than NOK 900 billion to the Norwegian state and society,” says Eldar Sætre, president and CEO of Equinor

Equinor estimates a break-even price for the full-field development of less than USD 20 per barrel. After reaching plateau for the first phase, which is anticipated during the summer of 2020, expected operating costs will be below USD 2 per barrel, according to Equinor.

Equinor says it expects cash flow from the project of around USD 50 per barrel in 2020, based on a price per barrel of USD 70.

Since the initial plan for development and operation of the field was approved in August 2015, investment costs for the first phase have been reduced by NOK 40 billion (USD $4.4 billion), to now NOK 83 billion (USD $9.13 billion).

“Starting production months ahead of schedule helps realize additional value from the field and is fitting for a project that over the development phase has redefined excellence in project execution,” says Anders Opedal, executive vice president for Technology, projects & drilling in Equinor.

The Johan Sverdrup field is being developed in two phases. Phase I was approved by Norwegian authorities in 2015 and involved the development of four platforms, including an accommodation and utility platform, a processing platform, drilling platform, and a riser platform, as well as three subsea installations for water injection, power from shore, an an export pipeline for oil and gas. Phase 2 of the development was approved in 2019 and is expected to start production in Q4 2022.

This news is a total 503 time has been read
Tags: equinor, johan sverdrup