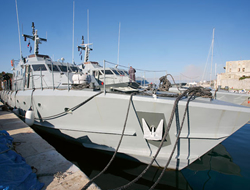 When Libyan coastguard officer Ashraf El-Badri needs to dispatch a boat to stop illegal migrants heading for Europe, his options are limited - ask the oil ministry for a tug, use an ageing fishing boat or board an inflatable.

European governments are counting on officials like Badri to stop an influx of hopeful migrants from setting off from Libya's shores to reach Italy and Malta.

But more than two years after the fall of Muammar Gaddafi, the country's coastguard is just not up to the task.

The force does not have radar or a single helicopter, or even adequate gear for the officers who go out to sea in small inflatables - the kind of boat sometimes used for fun rafting trips in other parts of the world.

"Smugglers have guns, equipment and they often open fire," said Badri, who heads the coastguard in the capital Tripoli.

"We just lack any equipment. We don't even have bulletproof vests or night goggles, which are not available in the local market."

Navy ships from the Gaddafi era rust away at a quay next to his office at the central Tripoli naval base. Some were damaged by NATO bombs when the alliance was helping the rebels fight Gaddafi and others have fallen into disuse through neglect.

The coastguard says it stopped 2,200 migrants on the sea in September and October alone. But officers admit they are unable to control Libya's 2,000-km long shore.

The force has only one large inflatable boat available in Tripoli, officers said. A base in Khoms, 100 km to the east, relies on two fishing boats and another slightly larger inflatable.

"We have to use fishing boats ... or we sometimes borrow tugs from the oil ministry," said Badri's colleague Masud Abdul-Samed, head of the operations room at Tripoli port.

The European Union has started training airport officials and guards for the sea and land borders, and Italian defence firm Selex, part of Finmeccanica group, this month began setting up a satellite system to allow officers to patrol borders remotely.

But Western officials are under no illusion that it will be easy to get the force up to speed anytime soon.

Libyan officials say one challenge is that political infighting has hampered funding for many government functions. Prime Minister Ali Zeidan, a liberal, has accused Islamists in parliament of deliberately blocking approval of budget payments in a bid to bring down his government.

Senior defense officials are also reluctant to take the initiative to decide who to train and what equipment to order - a legacy of the Gaddafi era when all decisions were made at the top.

Diplomats say another problem is that the defence ministry, to which the coastguard belongs, is dominated by multiple militias from the 2011 uprising whose rivalries are making it difficult to agree on the new structure of the force.

This news is a total 1319 time has been read