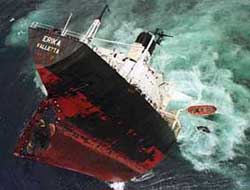 The Erika trial re-opened on Monday with the focus on what had been the ecological and human effects of the oil slick that followed the sinking of the vessel in December 1999.

The Erika trial re-opened on Monday with the focus on what had been the ecological and human effects of the oil slick that followed the sinking of the vessel in December 1999.

The court president Jean-Baptiste Parlos was told that the salt producers ( locally known as paludiers ) of Guérande had lost 100 per cent of their production in 2000 as they battled against the slick from infiltrating their irrigation systems in a year of combat. This amounted to 14,000 tons of salt. One indignant producer, Olivier Péréon, said, "It is not our job to pick up some oil and to raise dams"

A pleasure boat owner Mr Malarde saw his custom wiped out in 2000 and has been bankrupt ever since.

Representatives feel that the people who have suffered losses from the slick had not been properly compensated.

Last week the court was told that the principle cause of the ERIKA's loss was cost-cutting over repairs after its five year survey and that such repairs as had been undertaken in drydock at Bijela, Montenegro had been woefully lacking.

Instead of 209 tons of steel plating required to effect a satisfactory repair, naval architect Jean-Paul Christophe told the court, only 35 tons had been used.

He also disputed previous measurements of the ships plating, with some examples showing to be as little 7.5 mm compared to the 16 mm reading previously recorded. He said when the ship had left Dunkirk the state of corrosion was just unacceptable.

He said the original estimates of repairs of half a million dollars had been reduced to a mere $157,000.

Although the vessel had been operating without incident for 14 months prior to her loss, he said this was because she had been working in much kinder seas in the Mediterranean and she was simply not fit to face the harsher conditions in the Bay of Biscay in winter.

Mr Christophe said when questioned further on the causes of the disaster, "There is only one cause.." and said it was the repair work at Bijela.

This news is a total 1094 time has been read