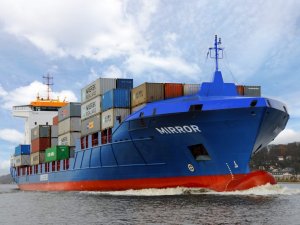 Despite posting first-half losses, Germany’s asset and investment manager Ernst Russ closed H1 2019 with a significant expansion in the shipping segment.
In June 2019, the company acquired a major shareholding in a ship portfolio comprised of a Handymax bulker and a 3,100 TEU boxship.

In the same month, Ernst Russ also expanded its ship portfolio to include a 4,200 TEU containership.

As explained, the company’s “further aim is to increase its involvement in directly held vessels.”

What is more, Ernst Russ bought further shares in the ElbFeeder portfolio which was fully consolidated as of August 1, 2019. The company now holds 51.995 percent of the shares in ElbFeeder. The joint venture is now operating seven feeder class vessels which “make a significant contribution to future Ernst Russ Group performance.”

“We consider the opportunities arising from our strategy, and its optimisation on a regular basis. Our strategic partnerships, like the ‘ElbFeeder’ joint venture, play a crucial role for our portfolio in this respect. We also look into opportunities to engage in strategic partnerships in the Real Estate segment,” Robert Gärtner, Executive Board of Ernst Russ AG, commented.

During the first half of this year, Ernst Russ sold three companies as well as a fund and asset management contract in the solar segment.

On the other hand, consolidated net loss stood at EUR 0.6 million in the first half of the year, compared to a profit of EUR 2.1 million seen in the corresponding period a year earlier.

Revenues dropped to EUR 20.8 million in H1 2019 from EUR 27.9 million posted in H1 2018. However, Ernst Russ expects revenue growth in the 2019 financial year due to the acquisition of the majority shareholding in the Elbfeeder ship portfolio.

“The half-year performance of Ernst Russ AG is attributable mainly to the streamlining of the group’s structure, which will enhance its ability to act effectively and in a flexible manner in the asset investment and management segment in the long term,” Ernst Russ explained.

This news is a total 165 time has been read
Tags: acquisition, earnings, Ernst Russ.