Estonia to get new Icebreaker 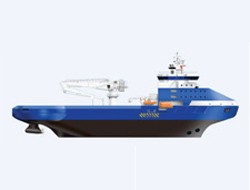 The value of the agreement is close to EUR 6 million, including the development of the conceptual design, the basic design, preparation of the tender documents needed for a public procurement for building the ship, and construction supervision.

The technical solution proposed by Aker Arctic represents the latest development in modern icebreaker technology. The new generation multipurpose icebreaker for Estonia with a total length of 108 metres and a breadth of 28 metres will be able to break 1.2 m thick level ice forward and astern at a continuous speed of 3 knots, as well as move smoothly through heavy ice ridges due to her novel stern design. The vessel's twin azimuthing drives will have a total shaft power of 17 MW. The vessel will be fitted with the equipment needed for oil combating, fire fighting and towing and, in order to perform multiple service tasks in ice-free periods, offshore equipment will also be installed.

The public procurement for building the vessel will be announced in May 2008, and the final costs as well as the deadline for completing the construction works will be known in autumn 2008, after receiving bids from invited shipyards. It is expected that the new multipurpose vessel would enter service in the 2010/2011 icebreaking season.

"This is another proof of the results of our intensive product development for modern icebreakers" says Mikko Niini, Managing Director of Aker Arctic. "This week we are evidencing the delivery of world's first Arctic Double Acting shuttle tanker with twin 10 MW pod drives from Samsung Heavy Industries in Korea under our licence to Russian owners for LUKoil/ConocoPhillips oil exports from Timan Pechora and this new award will bring a follow-up for the good performance already shown in the Baltic Sea by the Neste Shipping tankers "Tempera" and "Mastera" which have an excellent five year service record and are based on the same conceptual solution."

According to Mr Andrus Maide, Director General of the Maritime Administration, this is the first big step towards implementing the national icebreaking development plan for Estonia.

This news is a total 771 time has been read