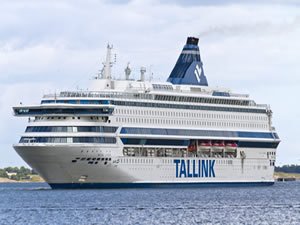 MS Silja Europa, owned by the Estonian shipping company, Tallink, will be moored in Falmouth, UK, and used by the British police to accommodate about 1,000 officers who will help safeguard the G7 summit in Cornwall this June.

“In order to secure further essential capacity, we reviewed a number of options and recently agreed to hire the MS Silja Europa, operated by Tallink; taking into account impacts to the environment, community, the operational needs, and those of our officers and staff,” a Devon and Cornwall Police spokesperson for G7 planning told Sky News, a British news channel.

The G7 will be the largest policing operation undertaken by Devon and Cornwall Police and, of the 6,500 officers policing the summit, 5,000 will be from outside the force. At almost 60,000 gross tons, MS Silja Europa is one of the largest cruise ferries in the world.

It was built in Germany and made her maiden voyage in March 1993 under the then Finnish-owned Silja Line; the ferry served routes between Finland and Sweden.

The ship became a household name in Estonia in connection to the country’s worst maritime disaster, the sinking of MS Estonia in September 1994. MS Silja Europa was the first vessel to receive the Mayday message from the sinking MS Estonia, and became the second vessel to arrive on-scene, following MS Estonia’s capsising and sinking.

The ferry’s home port was changed from Mariehamn in Finland to Tallinn in Estonia and the ship entered Tallink’s Helsinki–Tallinn service in January 2013.

Tallink describes MS Silja Europa as “the biggest and most beautiful cruise ship on the Baltic”.

The 47th G7 summit is due to take place from 11–13 June in Carbis Bay, St Ives, Cornwall, UK. The G7 – or group of seven – is an intergovernmental organisation consisting of Canada, France, Germany, Italy, Japan, the UK and the US.

The heads of government of the member states – including the new US president, Joe Biden – as well as the representatives of the European Union, meet at the annual G7 summit.

The UK that holds the presidency of the G7 in 2021, has also invited Australia, India, South Korea and South Africa as guest countries to this year’s summit.