Ethical void at the heart of Western press coverage of Turkey 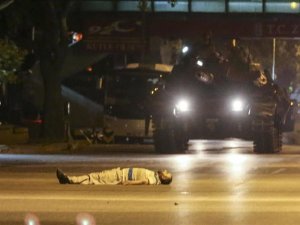 The writer is a professor of history at Sabanci University, Istanbul

“Recep Tayyip Erdogan: Turkey’s Ruthless President” reads the headline of a BBC article published only a day after last Friday’s failed military coup. “Ruthless in what manner?” was the question that immediately came to my mind. Ruthless in obtaining freely cast votes from Turkey’s citizens? Ruthless in opposing a military coup instigated by cultists ensconced in Turkish state institutions? Ruthless in telling it like it is?

If such an article were taken out of context and considered in a vacuum, maybe it could be considered as just some sort of mistake, or the author’s ignorance. But the reality is that the Western press, as a whole, publishes such ridiculous items on Turkey, its political leadership, and especially Erdogan, on a nearly daily basis.

The failed coup attempt last Friday was no exception. From the initial minutes after the country and the world realized what was happening around 22.00 Turkish local time (1900GMT), the Western press followed a carefully neutral, and in some cases, even pro-junta narrative. The coup was carried out against a democratically elected government, yet newspapers and commentators in democracies such the U.S. openly cheered the coup attempt. The New York Times, for example, which had already mounted a two-year campaign specifically aimed at Erdogan, maintained a “we don’t know what’s happening” narrative for hours after the failure of the coup attempt was clear. In the following days and hours the paper published a stream of editorials ("The Countercoup in Turkey," "Turkey’s Coup That Wasn’t,” "Mr. Erdogan’s Reckless Revenge,” "Trump and the Sultan") and articles ("Turkey Was an Unlikely Victim of an Equally Unlikely Coup,” "Many Turks Prefer Even Flawed Democracy to Coup) grossly distorting real events in the country, attacking the country’s president, and even providing space for conspiracy theories. This despite the fact that Erdogan had escaped the junta’s clutches, and possibly death, by only minutes in the opening hours of the event. Blaming the victim has never been carried out on such an international scale.

Around 2.00 a.m. on July 16, it was clear that the junta had failed. At that point, the Western press narrative switched back to the “dictator Erdogan” theme developed over the past several years, and added several convenient twists. Before the violence had entirely subsided in Istanbul, Business Insider already had a report up that, under the situation, was shocking ("Erdogan could use the latest coup attempt to further tighten his grip in Turkey"). They accused a democratically elected leader, who was only in the process of escaping unscathed from a military coup attempt aimed at either capturing or killing him, with “authoritarianism.” This is mind-boggling.

In other places, blatantly false rumors were reported as facts. The Daily Beast and other Western media sources reported that Erdogan was seeking asylum in Germany. But at the exact time those reports were emerging everyone in Turkey knew that he was en route to Istanbul. All one had to do was turn on a Turkish TV channel and learn for themselves. Others, such as Fox News, openly cheered for the violent downfall of a democratically elected leader of a NATO ally.

Some immediately developed conspiracy theories which were clearly a sop to assuage their disappointment over the junta’s failure. The Independent, already known for publishing false and slanderous articles about President Erdogan, wasted no time in reporting that a “very popular” idea was that Erdogan had “staged” the coup in order to consolidate power ("Turkey coup: Conspiracy theorists claim power grab attempt was faked by Erdogan"). In other words, a major British newspaper reported a conspiracy theory as worthy of consideration, despite the fact that the event in question involved the deaths of more than 200 citizens defending democracy against the junta, including people that Erdogan had close relationships with.

As someone who personally lived through the events in central Istanbul, and spent the night fearfully listening to military helicopters, gunfire, and war jets, I find the behavior of the Western press nauseating and unacceptable. The stances taken and information published constitute gross violations of journalistic ethics.

But this behavior is also a symptom of a larger problem. The West has, for at least 50 years, had a great deal of difficulty understanding the Muslim world, and its press has reflected this situation. The prejudices in Western society are reflected through its press. Attitudes and preconceptions are treated as factual bases for analysis, and concrete information is rarely considered. Those who write articles on Turkey for the Western press rarely have the experience, language skills, or educational background that would qualify them for such a task. But this is not a new diagnosis – Edward Said described this phenomenon in detail in his book Covering Islam, written more than 30 years ago. The truly disturbing aspect of today’s Western press coverage of Turkey is that people who consider themselves “liberals” or even “progressives” fall victim to fear and a lack of real information about Turkish society, history, and politics.

When will someone – someone important, influential, and who can have an impact – in the mainstream Western press take a stand against this behavior? Most Turkish people now have little regard for the Western press because of the blind and uninformed negative attitude taken towards Turkey’s political leadership.

This news is a total 4655 time has been read
Tags: Ethical void at the heart of Western press coverage of Turkey, türkishmaritime