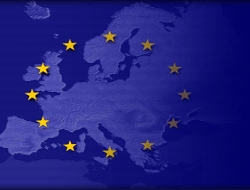 European Union governments say they will deploy additional warships off the coast of Somalia to fight piracy.

The EU force, the bloc's first naval crisis-management mission, would go into action by the end of the year

European Union governments say they will deploy additional warships off the coast of Somalia to fight piracy.

Germany will send a frigate, German Defense Minister Franz Josef Jung said. France has already dispatched a frigate and Spain has sent an observation plane. The goal is to have an EU fleet of three warships, a supply ship and three naval surveillance planes, Jung said.

``We have to take effective action against pirates,'' Jung told reporters today at an EU meeting in Deauville, France. ``We have to first push back the pirates, restore security on the high seas and make free maritime trade possible again.''

Attacks by pirates have surged this year off Somalia, and are running at close to one a day. Commercial shippers have warned they may start routing cargo around Africa, passing the added fuel and time costs on to clients. They've asked for help from Western navies, noting that joint patrols by the Malaysian, Indonesian and Singapore navies have almost eradicated piracy in the Straits of Malacca, the world's previous piracy hotspot.

The EU force, the bloc's first naval crisis-management mission, would go into action by the end of the year, French officials said. France holds the rotating presidency of the European Union and French President Nicolas Sarkozy has called for greater international effort to fight piracy.

Several EU countries, including France, Britain, and Denmark, already have warships in the Indian Ocean as part of Task Force 150, an anti-terrorist mission with the U.S, Canadian, and Pakistani navies. In the past 10 years off the coast of Yemen, skiff-borne suicide bombers have attacked a U.S. warship, the USS Cole, and a French oil tanker.

Around 60 boats have been attacked by pirates this year in waters off Somalia, the International Maritime Bureau says, and at last 200 sailors are being held hostage.

Warships from Task Force 150 do intervene to prevent pirate attacks on commercial vessels, though piracy isn't the fleet's main mandate.

``If they stumble upon something, they will chase them away, but won't engage in hot pursuit,'' said Sam Dawson, press officer for the London-based International Transport Workers Federation, which along with five shipping associations signed a joint statement this week asking for more protection.

U.S. warships are also shadowing a Ukrainian ship that was hijacked last week with its cargo of T-72 battle tanks, and a Russian warship is en route to the area.

Foreign powers may ``use force'' to free the ship as long as they coordinate with Somalia, Mohamed Jama Ali, the Somali foreign ministry's acting permanent director, told the Associated Press today.

Each country has its own set of rules. French naval commanders have captured 12 Somali pirates in two operations since April and sent them to mainland France to be prosecuted. The Danish navy has disarmed pirates, and later set them free on the Somali coast. The British navy has rules of engagement that prevent them from arresting pirates.

German-owned ships suffered the most attacks last year, registering 43 of 263 global incidents, according to the IMB. Germany has the world's largest container fleet and the third- largest merchant fleet.

``We would welcome strongly a joint European initiative and hope it falls into place very soon,'' said Max Johns, a spokesman in Hamburg for the German ship-owners associations. ``We are currently in talks with all parties of the German Parliament because we have a peculiar problem in Germany with the fact that the German navy has very tight legal restrictions on how they can help against pirates.''

This news is a total 1194 time has been read