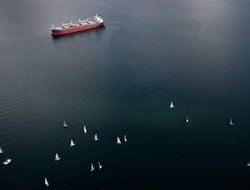 Photo: Scanpix The second and last Environment Council meeting under the Lithuanian Presidency of the Council of the EU took place in Brusse

The Council discussed the state of play in the ongoing legislative work in the field of environment. In the morning session ministers exchanged views on the Regulation on the Monitoring, Reporting and Verification of Carbon Dioxide Emissions from Maritime Transport.

“Since July, we have worked hard aiming to prepare the grounds for the negotiation with the European Parliament. At the Environment Council we will consider the scope of the proposal and the balance between ensuring a minimum level-playing field and allowing the necessary flexibility while minimizing administrative burden,” said Lithuanian Minister Valentinas Mazuronis.

Afterwards, the Council had an orientation debate on a draft regulation on the prevention and management of the introduction and spread of invasive alien species. The Commission proposal, presented in September 2013, aims to establish a framework for action to prevent, minimize and mitigate the adverse impact of invasive alien species on biodiversity and ecosystem services. In addition, it will limit social and economic damage.

“The Lithuanian Presidency in quite short time made as much progress as possible on this important file in the Council,”, said minister Valentinas Mazuronis. “The Presidency believes that scope of the regulation, particularly on the establishment of the list of invasive alien species, as well as actions at the level of EU bio-geographic regions are the most important issues at this stage,” stressed Mr. Mazuronis.

According to him, this proposal reflects a problem which has a huge impact on biodiversity, ecosystem services, as well on human health and economy, and it is proper time to explore possible measures to adequately treat the invasive alien species today.

During the meeting the Council was also informed on the current state of play on a number of dossiers advanced by the Presidency, such as on the directives relating to the Quality of Petrol and Diesel Fuels and on the Promotion of the Use of Energy from Renewable Resources (ILUC). The Lithuanian Presidency, the COP Presidency and the Commission informed the Council on the outcomes of the 19th session of the Conference of the Parties to the UN Framework Convention on Climate Change. Over the lunch ministers will debate on the environmental perspective of future actions “Towards a post-2015 overarching framework.”