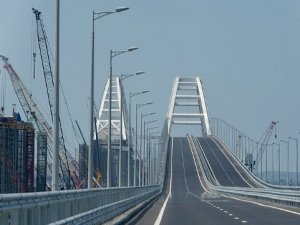 The European Council has imposed sanctions on six Russian entities involved in the construction of the Kerch Strait Bridge connecting Russia with the Crimean Peninsula, including a shipyard in Kerch.

The European Council has imposed sanctions on six Russian entities involved in the construction of the Kerch Strait Bridge connecting Russia with the Crimean Peninsula, including a shipyard in Kerch. The decision brings the number of firms facing EU sanctions in connection with Russia's annexation of Crimea to 44.

In a statement, the EC said that Zaliv Shipyard, construction company CJSC VAD, engineering firm GPSM, Mostotrest, Stroygazmontazh, and Stroygazmontazh Most "supported the consolidation of Russia's control over the illegally annexed Crimean Peninsula, which in turn further undermines the territorial integrity, sovereignty, and independence of Ukraine."

Half of the newly-added firms are controlled by Arkady Rotenberg, an oligarch with close ties to Russian President Vladimir Putin. Rotenberg already faces EU sanctions as an individual, and his spokesman dismissed the importance of the listing of three of his firms. "We're all proud of our work and if someone doesn't like it that's not our problem," he said in a social media post.

President Putin personally inaugurated the highway portion of the Kerch Strait Bridge in May, leading a parade of dump trucks across the span to mark its opening. The 12-mile-long structure is now the longest in Europe, and according to the Kremlin, 10,000 construction workers put in enough effort to complete it six months ahead of schedule. It is strategically important for Russia, as there is no land border between the contiguous Russian Federation and its unrecognized protectorate in Crimea.

Putin had pushed for the first span to open in advance of the 2018 summer tourism season in order to encourage more Russians to travel to Crimea - a theme seconded by Russian Prime Minister Dmitry Medvedev in a meeting in Sebastopol on Monday. "It is obvious that a large flow of tourists is traveling across the bridge, and this is very good for the Republic of Crimea and Sevastopol," Medvedev said. "You can say that the most difficult stage [of the annexation] has passed. We've entered into a more relaxed and planned mode of operation."

The Kerch Strait is a narrow choke point between the Sea of Azov and the Black Sea, and Russian forces partially closed it to shipping during the annexation of Crimea in 2014. Ukrainian officials have long warned that the bridge's narrow navigable span could also be used to restrict shipping to and from its ports on the Sea of Azov, and Ukraine's State Border Service reported last week that Russian security services have been delaying commercial shipping near the bridge.

Russian ispections of merchant vessels in the area have risen since the span opened in May, said spokesman Oleh Slobodyan, with wait times now running as long as three days. "The creeping hybrid blockade of the Azov Sea has been going on since late spring," he told Bloomberg.

This news is a total 413 time has been read
Tags: EU Sanctions Six Firms for Building Bridge to Crimea