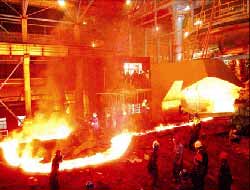 Europe's steel imports from China almost doubled during the first 11 months of 2007 versus the same period in 2006, the European Commission said Thursday as it continues to investigate whether China is illegally selling steel at below cost.

Europe's steel imports from China almost doubled during the first 11 months of 2007 versus the same period in 2006, the European Commission said Thursday as it continues to investigate whether China is illegally selling steel at below cost.

China provided around a third of the EU's steel imports, far ahead of other suppliers in Turkey, India, South Korea and Switzerland. EU officials are currently examining if China is illegally selling some steel at prices so low they are hurting European steelmakers such as ArcelorMittal SA and ThyssenKrupp AG.

The investigation began last month as statistics showed that the 27-nation European Union's yawning trade gap with China swelled by a quarter during the first nine months of 2007.

EU officials have repeatedly called on China to give concessions to avoid a protectionist backlash, calling on Beijing to cut state subsidies to industry, open up to more foreign exports and allow its currency to rise in value.

Steel producers complained in October about cheap Chinese steel, asking for a 40 percent surcharge on soaring imports of two types of steel and claiming that China's output was "out of control."

The EU investigation focuses on hot-dipped metallic coated iron or steel flat-rolled products. Under global trade rules, the EU has the right to impose extra charges on imports if it gathers evidence that China is illegally selling below cost.

Overall, EU steel imports for the first 11 months of last year grew 29 percent to 31.8 million metric tons, up from 24.7 million metric tons in 2006. The EU economy grew strongly over the period, calling for more steel to make cars and construct buildings. A metric ton is about 2,204.62 pounds.

But Asia gained most of the EU's foreign orders; the entire region increased steel exports to the EU by 67 percent. The EU's nearest neighbors -- such as Russia, Ukraine and Turkey -- increased exports by only 3 percent.

After China, Turkey shipped 4.2 million metric tons to EU countries during the period, a 16 percent increase. India upped its sales to the EU by 19 percent, while South Korea nearly doubled its exports to the EU, shipping 90 percent more steel at a total of 1.5 million metric tons.

This news is a total 925 time has been read