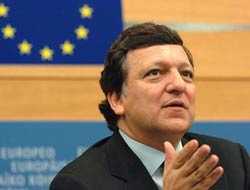 GERMAN Chancellor Angela Merkel and President of the European Commission José Manuel Barroso are to open a conference in Bremen on the Commission's Green Paper on a future Maritime Policy for Europe today.

GERMAN Chancellor Angela Merkel and President of the European Commission José Manuel Barroso are to open a conference in Bremen on the Commission's Green Paper on a future Maritime Policy for Europe today.

According to the EC the event will be “one of the high-points of the year-long Green Paper consultation process”. It says: “The three days of debate will bring together political and business leaders with scientific experts, and stakeholders' representatives from across the EU. The main focus of their discussions will be on the added value of an integrated European maritime policy, and how to identify new potential for sustainable development of Europe's oceans and seas and coastal regions. Participants will review the preliminary results of the ongoing process of consultation, and their conclusions will inform the activities of the Commission and the Portuguese Council Presidency during the second half of 2007.”

The shipping industry however is worried by several aspects of the EC's plans, especially its attempts to take over representation of the EC states at IMO and also possible moves towards an EU equivalent of the US Jones Act.

President Barroso commented, "The launch of an EU maritime policy was one of the first initiatives of this Commission. So I am delighted to take it forward with Chancellor Merkel and with the forthcoming Portuguese Presidency. The oceans and seas bound Europe, but they also bind it together."

Vice-President Jacques Barrot said, "90% of Europe's foreign trade arrives or leaves by ship. An integrated maritime policy will contribute to recognising the important role of maritime transport for the European economy."

This news is a total 1247 time has been read