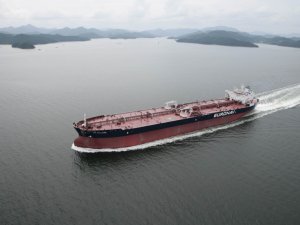 Gener8’s shareholders voted earlier this week to approve the merger, and following the closing on Tuesday, 60.9 million new shares issued to Gener8 shareholders as consideration for the transaction began trading Wednesday on the NYSE.

The merger, which Euronav CEO Paddy Rodgers described as an “important milestone”, takes place amid increased M&A activity across the maritime sector as the industry looks to cut costs and provide greater value through economy of scale.

“Today marks an important milestone in the continued development of Euronav,” Rodgers said. “Completing this transaction provides the crude tanker market with a global player of substantial size.”

Through the merger, Euronav has grown its operating fleet to 74 crude tankers and two FSO vessels. The fleet consisting of 43 VLCCs, 27 Suezmax, two ULCCs and two LR1s will have an aggregate carrying capacity of more than 19.4 million deadweight tons.

“Increasingly our customers and clients are demanding flexibility and scale solutions to their transportation requirements,” Rodgers said. “The enlarged operation will allow Euronav to meet these specifications.

“We look forward to integrating the Gener8 vessels into our fleet and continuing to provide our customers with a high quality and safe service.”

According to Euronav, the merger creates:

•Balance sheet assets of over $4 billion;

•Estimated pro-forma market capitalization of approximately $2 billion based on Euronav’s closing price of $9.10 per share on June 11, 2018;

•Marked-to-market leverage of less than 50 percent;

•A liquidity position estimated at more than $800 million, including cash on hand and undrawn amounts available under existing credit facilities;

•A well-capitalized, highly liquid company for investors wanting to participate in the tanker market;

•Increase of the scale of the Tankers International Pool (a spot market-oriented tanker pool) to 65 VLCCs allowing it to continue to provide the lowest commercial fees as a percentage of revenue in the sector.

Members of Euronav board of directors and executive management will continue to serve in such positions. In connection with the merger, Steven Smith, a former Gener8 director, was nominated and elected to serve as an independent director of Euronav at its General Meeting of Shareholders held on May 9, 2018. Effective as of closing, Smith will join Euronav’s board of directors to serve for a three year term as an independent director.

This news is a total 1001 time has been read
Tags: Euronav Completes Merger with Gener8 Maritime