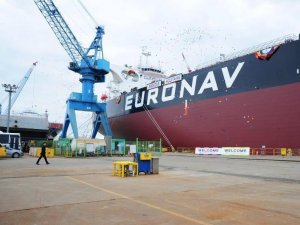 The vessel was delivered to her new owners on June 8th. The Company will record a capital gain of approximately USD 10.6 million in the current quarter.

The sale of the Cap Jean is part of a fleet rejuvenation program. Together with the sale Euronav is taking in operation four new Suezmax vessels, of which two have already been delivered, with the remaining two due for delivery from the Hyundai yard in South Korea (HHI) during summer 2018.

Those 4 vessels will all go under seven year time charter contracts with a leading global refinery player.

Meanwhile, Euronav NV and Gener8 Maritime announced that Gener8’s shareholders have approved the merger between the two companies by which, upon the closing of the merger, Gener8 will become a wholly-owned subsidiary of Euronav.

Through the Merger and its related transactions, Euronav will have an operating fleet of 74 crude tankers and two FSO vessels. The fleet consisting of 43 VLCCs, 27 Suezmax, 2 ULCCs and 2 LR1s will have an aggregate carrying capacity of 19.4 million deadweight tons.

This news is a total 684 time has been read
Tags: Euronav Sells Suezmax Cap Jean