Euronav shares to be sold 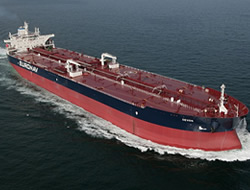 Belgian tanker owner Euronav NV has filed a registration statement with the U.S. Securities and Exchange Commission for a proposed initial public offering of its ordinary shares in the United States of America.
The company’s ordinary shares are currently listed on Euronext Brussels. Euronav said that an application has been made to also list the ordinary shares that will be offered in connection with the F-1 on the New York Stock Exchange under the symbol “EURN.”
The amount of shares to be sold has not been revealed.
According to Euronav, the proceeds from the shares will be used for covering debt and vessel acquisitions.
Deutsche Bank Securities, Citigroup, J.P. Morgan and Morgan Stanley are acting as joint book-running managers and as representatives of the underwriters for the proposed initial public offering in the United States.
The registration statement has been filed with the U.S. Securities and Exchange Commission but has not yet become effective.
http://turkishmaritime.com.tr
This news is a total 5360 time has been read