Euronav succeeds to get loan 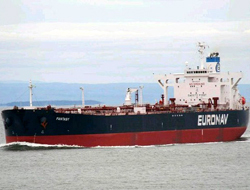 Average daily TCE rate achieved by Euronav's fleet in the Tankers International (TI) pool was some $47,000 per vessel compared to the $100,000 per day per vessel earned in the first three months of 2008.

Nordea, Calyon and Societe Generale are acting as bookrunners while Nordea is the sole facility agent.

The $300 million loan is slated to finance the acquisition of two VLCCs and four suezmaxes including two newbuilds.

According to Euronav, ?following seasonal trends the market has softened significantly in recent weeks but at rates lower than expected.?

?This is due to a lower demand for transportation caused by a reduced demand for crude oil as part of the global economic recession,? Euronav said.

Euronav's fleet consists of 24 VLCCs and ULCCs, of which 11 vessels are chartered in from third parties either directly or jointly with partners.

17 VLCCs and one ULCC are managed in the TI pool of which Euronav is one of the major partners.

Two ULCCs are currently being converted to FSOs.

There are 42 supertankers in the TI pool including three V Plus carriers of some 441,500 dwt each, and 39 double hull VLCCs.

This news is a total 784 time has been read