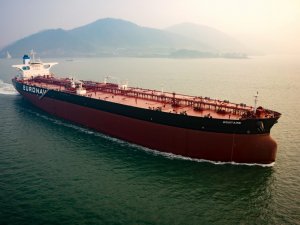 For the full year, Euronav’s net profit reached USD 118.8 million, rebounding from a loss of USD 110 million from a year earlier.

The company said that its fuel procurement strategy has shielded the company from the price volatility of compliant fuels ensuring it a smooth transition into IMO 2020.

Namely, in 2019 Euronav purchased sufficient fuel to cover more than half of its compliant fuel requirements for calendar 2020. The compliant fuel has been deployed since the end of Q4.

“The inventory, which has been fully tested, was purchased at a very competitive price well below the current spot price for compliant fuel.

“The fuel procurement strategy implemented so far has provided Euronav adequate protection against higher fuel prices and a high degree of optionality going forward regarding fuel strategies,” the company said.

The company added that it might consider the potential to install scrubber technology, adding that management would continue to closely monitor fuel market dynamics.

The exploration of the use of scrubbers comes as a major surprise, since previous Euronav’s leadership, headed by its former CEO Paddy Rodgers strongly opposed scrubber technology.

“Our fuel procurement strategy has delivered operational security over the key implementation period of IMO 2020. With continued limited contracting of new vessels, an order book at 25-year low and fleet expansion capital being rationed, the prospects for a sustainable cyclical upturn remain in place, ” Euronav’s CEO added.

Demand for crude oil recovered strongly during Q4 (IEA estimate 1.9 bpd for Q4 2019) on factors other than seasonality with a prolonged period of refinery maintenance reversing ahead of IMO 2020 coupled with GDP growth from improving trade conditions, Euronav said.

The OPEC production cuts had a negligible impact on the tanker market due to longer ton-mile trading routes principally from the Atlantic (US Gulf, Brazil and the new Johan Sverdrup field from Norway) shipping crude to the Far East. The US crude export phenomenon continues to deliver with a new high of 4.4 million bpd recorded in December (source EIA).

Periodic geo-political tensions, primarily in the Middle East, also contributed to a stronger freight environment during the quarter and into Q1. Other potential disruptions from vessels leaving the fleet to install scrubbers were far less intrusive than anticipated during Q4 as half the planned 98 installations were deferred into 2020.

On an annualized basis consensus estimates that a further 96 VLCCs plan to retrofit scrubbers during 2020 reducing the fleet capacity by 1.9% – thus providing a further positive driver to already robust fundamentals, Euronav’s analysis shows.

Contracting of new vessels has continued to remain benign with the order book static at 25-year lows and the run rate of new tanker orders over the past 12 months below the level of new VLCCs required per year from IEA demand projections.

Increasingly restricted access to capital from traditional shipping banks and reluctance to invest capital in current technology whilst the sector is targeting substantial reductions in carbon emissions by the end of the new decade which is likely to require new propulsion technologies and/or fuels, have been among key reasons behind the behavior.

“The world large tanker fleet will also come back as of this year to a more regular fleet age profile across all vintages. This means, that should the freight markets show weakness, there will be a healthy number of vessels old enough to be recycled and therefore reduce the supply of ships available for crude oil transportation,” the company explained.

The fundamentals that underpinned a robust freight rate market through most of Q4 2019 were augmented by IMO related disruption to fleet supply and increased geopolitical risk as the calendar year closed.

“Combined with seasonal strength during the winter period this pushed freight rates temporarily to elevated levels between mid-December and mid-January. As expected seasonal trading patterns have reduced earnings and activity since then to more normalized levels. Concerns over the potential impact of the Coronavirus, a serious respiratory virus, on freight rates and capital market activity are at a very early stage but will require monitoring,” Euronav added.

“Whilst the fundamentals remain very good, management acknowledges that it is premature to assess the impact of the outbreak of the Coronavirus in China.”

The company expects the demand-supply balance to provide healthy market fundamentals on a longer-term with the assistance from IMO 2020’s impact on short term disruption to the global shipping network.