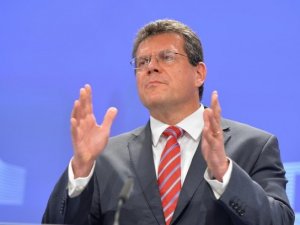 EC's summer package aims to decarbonize economy and give consumers a central role, according to EU Chief Maros Sefcovic

European Commission's summer package was released Wednesday with the aim of decarbonizing the EU economy and giving consumers a central role in energy transition, according to Vice-President of the European Commission responsible for Energy Union, Maros Sefcovic.

The package aims to implement the Energy Union strategy focusing on the climate change policy, launched as one of the political priorities of the Juncker Commission in February 2015.

As part of the Energy Union strategy, the Commission presented proposals to deliver a new deal for energy consumers, to launch a redesign of the European electricity market, to update energy efficiency labeling and to revise the EU Emissions Trading System.

"In the Energy Union strategy, we committed to empowering European consumers, creating a single well-functioning energy market, putting energy efficiency first and becoming the number one in renewables," Sefcovic said in a written statement.

Additionally, he said that the package give prominence to the "Energy Efficiency First" principle and put households and business consumers at the heart of the European energy market.

The summer package proposals represent the first legislative step towards implementing the EU's commitment to reducing greenhouse gas emissions by at least 40 percent domestically by 2030.

The proposals aim at pushing energy investment toward innovative and cleaner alternatives. In addition, it aspires to safeguarding the international competitiveness of industry sectors that are at the greatest risk of seeing their production relocated outside the EU to less greenhouse gas constrained jurisdictions.

The Commission proposes returning to the original A to G energy label scale, which is simpler and well understood by consumers. It aims to ensure consumers are able to make more informed choices that will help them save energy and money.

According to the summer package, consumers need to become just as well-informed and empowered as buyers and sellers on wholesale markets through clearer billing and advertising rules, trustworthy price comparison tools and by leveraging greater bargaining power through collective schemes such as collective switching and energy cooperatives.