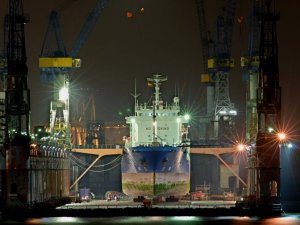 European shipyards and maritime equipment manufacturers are urging the European Union to protect the sector from the impact of the coronavirus pandemic amid looming demand drop for specific ship types, including passenger ships, dredgers, and offshore supply vessels.

Furthermore, orders for new ships and retrofitting are being postponed amid cost-cutting measures employed by owners.

“Europe risks to lose its strategic maritime technology sector to Asia, whilst European shipyards and maritime equipment manufacturers are key for the European Green Deal, for Europe’s Blue Economy and mobility, for Europe’s defence, security and autonomy and for Europe’s access to seas and trade of goods and passengers,” says Kjersti Kleven, SEA Europe’s chairwoman.

“Such a loss would make Europe entirely dependent on Asia for the design, building, repair, retrofitting, and equipment of civilian ships, with devastating effects for Europe’s autonomy, defence, and security, maritime economy and workforce.”

SEA Europe welcomed the recent horizontal initiatives from the European Commission in response to the COVID-19 outbreak, as they try to minimize the impact of this crisis for all European industries.

However, the association urged the commission to introduce sectoral policies and financial support tailored to the specific needs of Europe’s shipyards and maritime equipment industry in order to mitigate the severe consequences of the COVID-19 outbreak and safeguard the survival of the sector.

The calls are being made ahead of expected cancellations of many orders for newbuilt cruise ships since the cruise sector has suffered a major financial blow from travel restrictions and health issues onboard vessels.

The association believes the demand for cruise ships and related maritime equipment will not restore before shipowners are confident again about the market conditions and passengers regain confidence in financial and sanitary circumstances.

SEA Europe urged the EU to regard the naval defence industry as critical for the EU’s future security and defence needs and continue – and where possible even reinforce – the implementation of scheduled projects and programs [such as the EDF] as means to ensure that the EU’s industrial capabilities are kept intact.

“The COVID-19 outbreak has already clearly demonstrated the disastrous and dangerous effects of Europe being entirely dependent on foreign nations (e.g. in the field of medical equipment). Such example should not be replicated in Europe’s maritime technology sector, especially in times of increasing international political tensions and growing trade protectionism or in times of high political ambitions such as the European Green Deal,” the association concluded.

This news is a total 532 time has been read
Tags: coronavirus, EU Commission, SEA Europe.