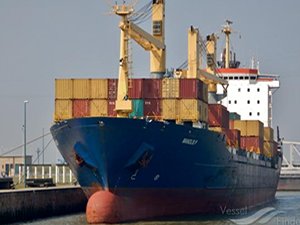 Greek container shipping company, Euroseas has announced the sale of three boxships for a total of approximately US$7.6 million.

Euroseas sold the 1995-built Manolis P with 1,452TEU capacity, the 1993-built Kuo Hsiiung with 1,169TEU capacity and the 2000-built EM Oinousses with 2,506TEU capacity, which were some of the eldest ships of the company's fleet.

The Athens-based firm said that it will need US$7 million to repay the loans of the sold container ships.

According to VesselsValue data, all three of the vessels are shown as dead, having been sent to Pakistan for demolition.

"Certain planned sales of our vessels for scrap were delayed and eventually completed in Q3 at lower prices, as a result of lockdowns and declines in scrap steel demand," commented the chairman and CEO of Euroseas, Aristides Pittas, in the company's Q2 results announcement.

He also highlighted that the second quarter turned out to be highly profitable for the company despite the coronavirus challenges which affected the charter rates of its vessels.

"We have responded quickly to address the possibility of cash flow squeeze issues by agreeing with certain of our banks to defer installments and relax restricted cash covenants in case such liquidity is needed," Pittas stated.

Euroseas, which operates 16 vessels after this latest sale, reported total net revenues of US$13.5 million, net income of US$1.3 million and adjusted EBITDA (Earnings Before Interest, Tax, Depreciation, and Amortization) of US$4.4 million for the second quarter of the year. The respective figures for 2020 first half were US$28.9 million, US3.2 million and US$8.4 million.

Tasos Aslidis, chief financial officer of Euroseas, seemed satisfied with the improved results of the company and believes that a main reason for that is the significant decrease of the total daily vessel operating expenses, including management fees, general and administrative expenses but excluding drydocking costs. "Cost control remains a key component of our strategy," he emphasised.

This news is a total 2357 time has been read
Tags: Euroseas, Euroseas sells three container vessels for scrap

FMC to investigate carriers' runaway rates successSpot rates between Asia and the US peaked last week at US$3,711/FEU on the west coast and US$4,496/FEU to the east coast, according to Freightos’ FBX01 Daily and FBX03 Daily Indexes.

Balancing Capacity Key to Maintaining Container Freight RatesWhile the container shipping industry is particularly vulnerable to changes in consumer spending, the major carriers were successful in managing their business to produce strong results in the first half of 2020.