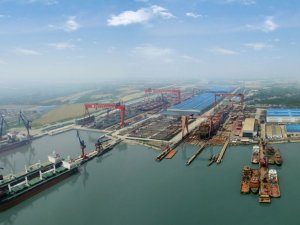 Greek owner Euroseas has signed an addendum to its shipbuilding contract with China’s Yangzijiang Shipbuilding for the construction of a kamsarmax vessel scheduled to be delivered during the first quarter of 2018.

According to the addendum, the company acquired the option until December 31, 2016 to decide whether to build the vessel, or build a vessel of different type, or credit the payment already made as part of the original contract to acquire a different vessel from the yard at a mutually agreed price, or decide to cancel the shipbuilding contract without any additional cost.

In the meantime, the company also announced that the first of its ultramax vessels, under construction at Sinopacific Shipbuilding’s Dayang yard and originally scheduled for delivery in the second quarter of 2016, was cancelled due to excessive construction delays.

The company has demanded the return of its progress payments and other expenses as specified in the newbuilding contract and secured by refund guaranties. The parties have referred the matter to arbitration.

Euroseas has a second newbuilding contract for a similar ultramax vessel, Hull Number DY 161, with the same yard which is also facing significant delays.

This news is a total 4876 time has been read
Tags: Euroseas switches Yangzijiang order to an option, cancels Dayang newbuilding, türkishmaritime