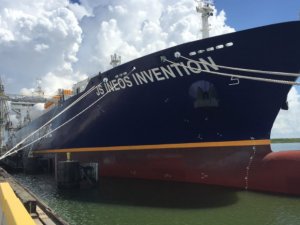 Built at China’s Jiangsu New Yangzijiang shipyard, Ineos Invention was delivered in May this year to its charterer INEOS.

The ships are purposely built for the transportation of ethane, although they can carry a wide range of petrochemical gasses and LPG.

“The ‘Dragon Class’ vessels are the largest, most flexible and advanced multigas carriers built to date. Strong relations, strategic focus and an innovative approach between Evergas & INEOS have been key elements that allowed for the creation of a seaborne pipeline bringing US ethane across the Atlantic Ocean to Europe,” Evergas said.

This news is a total 918 time has been read
Tags: Evergas’ Eighth Dragon Ship Named in Houston