Evergreen in talks for mega boxship sale and leaseback deal 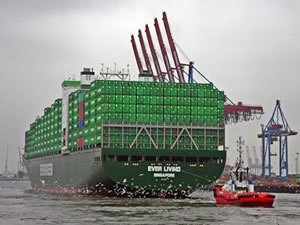 Taiwanese liner Evergreen is currently in negotiations with an unnamed third party for the sale and leaseback of two 24,000 teu mega boxships.

The deal will be carried out through Evergreen’s subsidiary Greencompass Marine. No other details were disclosed, with Evergreen only saying it would make a further announcement when the deal is concluded. Japan’s Shoei Kisen is deemed the most likely party Evergreen is speaking with. Shoei Kisen sister firm, Imabari Shipbuilding, is capable of building such giant ships.

VesselsValue data shows the ships being built by Samsung Heavy feature 23,764 teu each, while those being built at Chinese yards are 23,000 teu ships.

The ships are expected to be delivered in 2022.