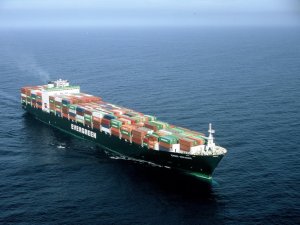 The deal between the companies is to buy 10 new 2800 TEU container vessels. The Contract value is $390mln.

These are in addition to the order for ten similar vessels announced last month from CSBC in Taiwan. In August, Evergreen had already ordered ten similar 2,800 teu container vessels at CSBC. Evergreen plans to deploy all 20 of the new ships in the intra-Asia trade lanes.

As ships operating in the intra-Asia trades spend much of their time in coastal areas and make frequent port calls, the ships are designed to reduce their impact on port communities and environment, Evergreen said.

In July, Evergreen booked five 2,800 teu boxships at Imabari and another five similar ships at CSBC.

Evergreen’s B-type vessels will be 211 meters in length, 32.8 meters wide, and have a design draft of 10 meters. The ships are designed to load 13 rows of containers on deck, which is within the span of existing gantry cranes in the major ports on the intra-Asian trade.

This news is a total 4759 time has been read
Tags: evergreen, orders, ships, container vessel