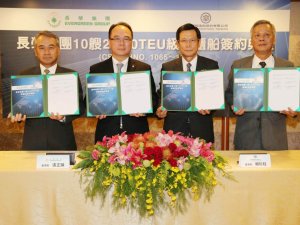 Evergreen did not reveal the value of the contract, but it is speculated that the price tag for these ten feeders could be around USD 400 million.

The boxships will be 211 meters in length, 32.8 meters wide, and have a design draft of 10 meters. The ships are designed to load 13 rows of containers on deck, which is within the span of existing gantry cranes in the major ports of intra-Asian trade. The hull design of the vessels is wider in comparison to ships of a similar capacity. Such design enables the ships to navigate in shallower ports encountered in the intra-Asia trade and to enhance their cargo carrying capability.

The ten ships will be equipped with CSBC’s Sea-Sword Bow (SSB) technology. This energy-saving device enables the ships to maintain optimum performance in various navigational conditions and to reduce fuel consumption by around 10% compared to traditional bow designs, according to Evrergreen.

The ships will also be equipped with an electronic-controlled fuel injection engine, which meets the IMO Tier II standards for NOx emission and can reduce the emissions by around 20%. In line with IMO’s requirements of Energy Efficiency Design Index (EEDI), the ships can cruise at a speeds up to 21.8 knots.

This news is a total 3742 time has been read
Tags: evergreen, order, boxship, taiwan, csbc, turkishmaritime