Evergreen to spend $5.5b 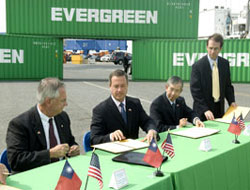 Evergreen Marine has announced plans to spend $5.5 billion to build 100 container ships before the anticipated recovery of the global economy in 2012.

Evergreen Marine has announced plans to spend $5.5 billion to build 100 container ships before the anticipated recovery of the global economy in 2012.

Evergreen Marine has announced plans to spend $5.5 billion to build 100 container ships before the anticipated recovery of the global economy in 2012. The fleet augmentation will help the world's fourth largest container shipping line to move to the third slot. In its first major shipbuilding project, the company plans to go for some 30 ships in the 8,000 TEU category, 40 ships in 5,500 TEU, 10 ships in 3,900 TEU, and 20 ships in 2,800 TEU. The company has been avoiding ultra-large ships of over 10,000 TEU. According to reports, the company is likely to place orders with Japanese and Korean shipbuilders for the new ships.

According to Evergreen chairman Chang Yung-fa, the global economy is expected to bottom out in the second half of 2011 before achieving real recovery in 2012. He believes that with the drop in global steel prices, shipbuilding cost will plunge to $10,000 per TEU in 2011, compared with $15,000 now.

Current shipping industry downturn presents for some very positive opportunities. For example, Mitsui OSK Lines (MOL) president Akimitsu Ashida believes that forecasts of over-tonnage in the container shipping sector will fail to materialise in the near future.

In addition, scrapping of aged vessels, which were used longer than originally planned, will be accelerated due to the recent market deterioration. "These developments will reasonably and favourably contribute to adjust demand and supply balance of world tonnage," Mr Ashida said.

What's more, he said such action will help reduce overall costs, particularly expenses relating to vessel maintenance and repair work, bunker fuel costs and lubricants, all of which rose sharply when material and crude oil prices remained high for a few years. "We can also expect other issues such as shortage of seafarers and repair docks to be eased in line with the adjustment of the shipping market," added Mr Ashida.
"As to our mid-term and long-term strategy, in order to prepare for future increase of demand in seaborne trade, we will fulfill our fleet plan to enhance and expand our competitive tonnage. This basic strategy remains unchanged," he said.

After a number of consecutive negative sessions, stretching back into the last days of 2008, the Baltic Dry Index (BDI) which tracks shipping rates for hiring vessels to carry commodities like iron ore, grain and coal, managed to post come back towards the end of last week.

While the index ended Wednesday at 789 points, up by 14 points from Tuesday, it rose 32 points to end at 821 points on Thursday.

Thanks are due for the renewed Chinese interest in iron ore and capesize sector, which rose by 112 points at 1564. As a result, the Baltic Exchange's average time charter rose at $11037, up by $1181 from the previous day.

All other segments of the market were virtually unchanged, posting marginal losses of 1-2 points.

The Panamax index fell by one point at 532 points, the Supramax index stood at 389 points, also down by one point, while the Handysize index was down by 2 points at 270. The average time charter for Panamaxes ended the session at $4235, supramaxes were at $4065, while handysizes fell the most at $3967.