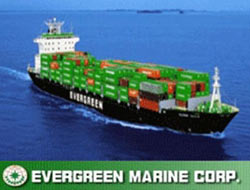 TAIWAN-based container shipping giant Evergreen Line is to launch a new weekly service linking Asia with ports in the Eastern Mediterranean in November 2007.

TAIWAN-based container shipping giant Evergreen Line is to launch a new weekly service linking Asia with ports in the Eastern Mediterranean in November 2007. The AEM (Asia-East Mediterranean) service will employ seven ships of between 2,500 TEU and 3,500 TEU.

Evergreen Marine Corporation's President, Jack Yen, explained that the new service was in line with customer demand: "The East Med ports to be called at on a direct basis by our new AEM service were previously served by feeders. However, such is the growth in cargo volumes through these ports that it is now more efficient to offer a direct service. Of course, this is also appreciated by our customers as transit times are improved by operating direct sailings."

Evergreen Line will also use the AEM service to connect with feeders serving other ports in the East Med and Black Sea. The first sailing will be made by the 2824TEU Ital Ottima, which is scheduled to depart from Shanghai on 9 November.

Evergreen says that during September it has run an ad-hoc sailing in the Asia/Eastern Mediterranean trade and will run another two ad-hoc sailings in October ?to cope with booming demand in the region?.