Excel grees charter of 2 its ships 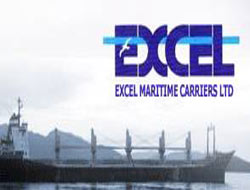 Excel Maritime agrees charter of two of its ships

Excel Maritime Carriers Ltd (NYSE: EXM), an owner
and operator of dry bulk carriers and a provider of worldwide seaborne transportation services for dry bulk cargoes, announced on Friday that it has entered into time charter agreements for the M/V Powerful and the M/V Princess I.

The M/V Powerful has been chartered for a period of about 23 up to about 25 months at US$39,000 per day to a first class European charterer. The vessel will be delivered into charter within July 2007.

CEO Christopher Georgakis commented, “Consistent with our strategy of employing the majority of our vessels on long term time charters, we have continued to take advantage of the strong freight rate environment, and in this respect we are pleased to announce that we have secured M/V Powerful and M/V Princess I at profitable long term employment to first
class charterers. Following these time charter agreements, 53% of our fleet operating days for the second half of 2007 63% for the full year 2007 and 40% for the full year 2008 are fixed under short - and long - term time charters. This fleet deployment strategy enables us to generate strong and predictable cash flows for the longer term, while also taking advantage of market opportunities as they arise, thereby maximizing our performance for
the long term.”

This news is a total 655 time has been read