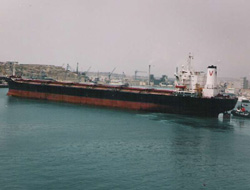 Eurex, ICE and Nymex have indicated to traders they are investigating the feasibility of establishing a regulated exchange for forward freight agreements.

The metal exchange revealed plans in mid-July to launch a regulated investment exchange for FFAs within the next 12 months.

About 85% of FFAs are processed via a clearing house, which acts as a central counterparty for the buyer and seller of derivatives, removing default risks associated with OTC trading.

He discussed the LME"s plans with their executives at a meeting 12 days ago.

Mr Albertijn said he had yet to meet with other exchanges" executives since taking over the position as chair several months ago, but they had met with his predecessor.

FFAs totalling 2.1m lots, or 2.1bn tonnes of freight, worth $155bn were traded OTC in 2008, according to the Baltic Exchange. The exchange provides the freight indices against which the OTC contracts are settled.

Derivatives brokers say the market is set to severely contract this year, to be worth between $30bn-$40bn.

Eurex, which says it is one of the world"s largest derivatives exchanges, confirmed to Lloyd"s list it was undertaking a feasibility study.

FFAs could be caught up in a regulatory overhaul of global trading of OTC derivatives, worth nearly $580trn, after the role of credit default swap defaults in the global banking crisis focused attention on the largely unregulated sector.

US and European lawmakers have plans to move ?standardised? OTC derivatives to a regulated exchange, also using clearing houses.

Freight derivatives brokers have long objected to any move to centralise FFA trading, fearful the move would diminish their role and cut commissions.

They successfully scuppered Baltic Exchange plans to launch a central screen last November. The multilateral trading facility would not have provided the international trade of FFAs that exchange-trading could bring.

The metal exchange has told traders with whom it has held discussions that it would grow liquidity to four or five times physical trade.

FFA volumes are currently the same size of the physical trade they cover, with contracts dominating the transport of iron ore and coal on capesize and panamax bulk carriers.

This news is a total 3173 time has been read