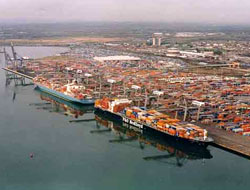 The director of the Port of Southampton for Associated British Ports, also revealed the UK?s first master plan by a private port, which included details of development and expansion over the next twenty years.

The director of the Port of Southampton for Associated British Ports, also revealed the UK"s first master plan by a private port, which included details of development and expansion over the next twenty years.

The conclusion of the event was that it is vital for Southampton Port not to stagnate during recession, but to focus on investment in the future so that it can be at the forefront of early business opportunities as the global economy moves into recovery.

This was made especially clear in presentations from the UK cruise industry and Associated British Ports. The cruise companies Carnival and Royal Caribbean explained how Southampton Port was pivotal to their plans for business expansion, with significant investment in new ships continuing despite the economic slowdown. Doug Morrison, director of the Port of Southampton for Associated British Ports, also revealed the UK"s first master plan by a private port, which included details of development and expansion over the next twenty years.

Sally Lynskey, chief executive of Business Southampton (the hosts of the PCFS Convention) said, "Never has it been more important for Southampton Port to focus on growth and development, so that it is ready to take full advantage of new opportunities that arise as the economy recovers. Those ports that are caught sitting on their laurels during the current downturn will surely miss out in the future and the community of Southampton Port is determined not to be one of them."

Several speakers used the words "built up a head of steam", referring to the success of a prosperous Port of Southampton before the recession, and how this had put it in excellent position to weather the current economic storm. It was agreed that it was vital not to stop investment and planning now as a knee-jerk reaction to the current downturn, but to focus on the future and maintain an optimistic outlook.

Malcolm Le Bas, chairman of Business Southampton said, "The PCFS event has highlighted the extent to which businesses and organisations in the region work together. This means that Southampton is well placed to cope in the current economic downturn as the city, the port, businesses and universities work together in collaboration for the greater good of the Southampton region.

The port currently has Eastern Docks (c170 acres) and Western Docks (c585 acres), with a strategic land reserve at Dibden (c800 acres).The port"s focus has been to maximise land use in the Western and Eastern Docks through increased allocation of land use to the port"s key trades, the elimination of non-port related land uses and the intensification of land. Through the creation of multi-deck storage facilities, an extra 30 acres of capacity has been created.

By 2020 the Master Plan states that all growth will be handled within the Eastern and Western Docks. This will include berth deepening, a new container terminal, up to three further multi-deck car storage compounds, and the redevelopment of the Royal Pier area for recreational use. By 2030 the Master Plan states that phase one of the Dibden Terminal will be operational, further multi-deck car storage compounds will be built and a possible fifth cruise terminal built in the Western Docks.

Brad Roynan, chief executive of Southampton City Council said that the port is critical to the City. In 2007 the overall contribution to the local economy was estimated to be £2bn, with 10,000 to 12,000 direct jobs. Each year the local economy benefits by approximately £250m from the cruise ship turnaround business. The local hotel and hospitality industry benefits from an estimated 100,000 cruise passengers staying overnight each year, with the retail sector receiving a minimum of £5m related to cruise ship business.

This news is a total 2068 time has been read