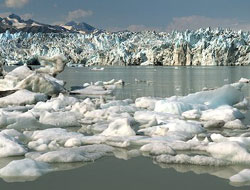 With global warming, shipping and oil companies are looking ahead at how to exploit the new open waters.

Shipping and oil companies are looking ahead at how to exploit the new open waters.

With global warming melting the Arctic's eons-old ice at an alarming rate, shipping and oil companies are looking ahead at how to exploit the new open waters. For the past 30 years, the summer Arctic icepack has been shrinking. In 2007, the melt reached record levels. This past summer, the ice shrank to the second smallest area on record. And while much of the discussions so far have been focused on dealing with global warming and on preserving habitat and protecting polar bears and walruses, another change is looming. When will commercial interests be able to develop the once-impregnable region?

Scientists say the Arctic's seas could be essentially free of ice in the summertime by mid-century.

"I'm convinced, based on models and observations, the trend is one of accelerated ice loss, and we're probably looking at a scenario, even with the best efforts to mitigate (global warming), that we'll continue to see loss," said Richard Spinrad, director of research for the National Oceanic and Atmospheric Administration.

Already, shipping has increased within the Arctic Circle to serve the oil and gas industry.

The recent increase has been the result of a spike in commodity prices, not to capitalize on retreating sea ice, said Lawson Brigham, a former Coast Guard captain and climate scientist who made many voyages into the Arctic and around Antarctica.

The pull is strong in a world dependent on petroleum.

In July, the U.S. Geological Survey issued the first public estimate of the petroleum resources north of the Arctic Circle. Its findings: 90 billion barrels of oil and 1,670 trillion cubic feet of natural gas.

Brigham is helping plan for the changes ahead as chairman of the Arctic Marine Shipping Assessment of the Arctic Council, an intergovernmental forum of eight Arctic nations.

"We don't profess to know exactly how industry will move ahead, but we know there's an increase of ships in the Arctic Ocean, and maybe that increase hasn't been matched by policy responses from safety and environmental standpoint, so that's what we're working on," he said.

Brigham was the captain of the icebreaker Polar Sea in 1994 when it teamed in a scientific expedition with Canada's Louis S. St. Laurent to make the first ocean-to-ocean surface voyage over the North Pole. "There was a lot more ice there than there is today," he said.

"Quite an extraordinary difference in 14 years."

Except for some cruise ships and icebreakers, the traffic in the Arctic now is regional - mostly ships going in and out to provide transportation for the oil and gas industry, he said.

Oil companies have been looking at Alaska's arctic waters as a new frontier.

And in the past two years, the Bush administration has leased large parts of those waters - the Beaufort and Chukchi Seas.

Shell was the main buyer of the Chukchi leases in February, spending $2.1 billion.

Conservation groups and Native communities challenged the Minerals Management Service's approval of a permit for Shell to drill exploratory wells in the Beaufort Sea. On Thursday, the U.S. Court of Appeals for the 9th Circuit ruled that the MMS did not conduct the "hard look" at environmental impacts required by law and canceled the permit.