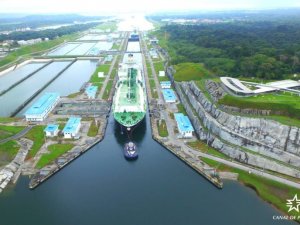 The Panama Canal will reduce the number of available reservation slots and introduce new fees as part of a series of measures to sustain water levels and ensure reliability of the waterway following years of drought.

The Panama Canal Authority on Monday announced the changes as part of a short-term plan to sustain minimum water levels for both the Panamax and new Neopanamax locks while it seeks a long-term solution to water.

The new measures come following an extended period of low rainfall that has resulted in historically low water levels at Gatun Lake, the main source of water for the Canal, despite extensive water-conservation measures already in place.

According to the Panama Canal Authority, after several years of below-average rainfall, the amount of rainfall recorded in 2019 was 20 percent below the historic average and the fifth lowest recorded rainfall in 70 years. Meanwhile, the Canal has also experienced an approximately 10 percent increase in water evaporation levels due to a 0.5 to 1.5 degree Celsius rise in temperature, the Canal Authority said.

The Panama Canal Authority detailed the new fees and changes to slot reservations, which will take effect February 15, in a statement published to its website.

According to the statement, a new freshwater surcharge, reportedly in the amount of $10,000, will be applied to all vessels over 125 feet in length overall that transit through the Panama Canal. In addition, a variable fee ranging from 1% to a maximum 10% of the vessel’s toll will be applied depending on the water level of Gatun Lake at the time of the transit.

“Without fee and operational changes, the Canal’s water levels are projected to drop to levels that would affect the Neopanamax and Panamax Locks. These new measures are intended to better provide reliability in water levels and therefore transit schedules,” the Panama Canal Authority said.

Proceeds from the additional fees will go towards new and existing water conservation measures, as well as for financing of projects aimed on addressing the sustainability of the water supply in the medium and long-term.

The new measures come after the Panama Canal closed its FY2019 with a record tonnage of 469 million Panama Canal tons (PC/UMS), a 6.2 percent increase compared to FY2018.

This news is a total 604 time has been read
Tags: climate change, panama canal expansion