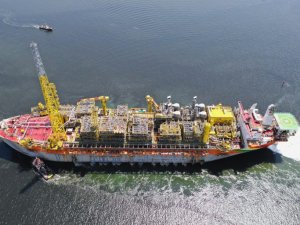 Exxon Mobil Corp on Monday raised its Guyana oil estimates by 2 billion barrels with disclosure of a new discovery, as it continues to develop one of the world’s most important new oil and gas blocks in the last decade.

The new find continues an Exxon-led consortium’s long string of discoveries in Latin America’s newest crude producing nation and underscores the importance of Guyana to Exxon for increasing its future oil output.

Exxon and partners Hess Corp and China’s CNOOC started production at the Stabroek block ahead of schedule in December. The latest discovery, the 16th by the group, brings total recoverable oil and gas resources to more than 8 billion barrels.

Recoverable oil is accessible by existing drilling technologies and is profitable to pump at current prices. The new discovery would be added to official resource estimates at a later date, Exxon said.

The Yannis P, carrying Guyana’s first crude cargo, is underway to the U.S. Gulf Coast, where Exxon plans to discharge the vessel into its refining network. The shipment marked the tiny South American nation’s long-awaited debut as an oil exporter.

Production from the Liza Phase 1 development is currently ramping up and it will produce up to 120,000 barrels of oil per day in the coming months, the company said.

While Exxon plans to refine Liza crude itself in the short term, Guyana’s government recently awarded Royal Dutch Shell a tender for its first three cargoes and it plans to launch next month a competitive process to choose a marketing agent to trade and export its share of production.

Exxon is scheduled to report fourth-quarter earnings later this week on Jan. 31.