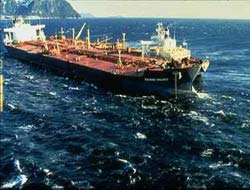 Oil giant ExxonMobil yesterday urged the US Supreme Court to cancel a $US2.5 billion ($2.67billion) compensation award for the 1989 Exxon Valdez spill in Alaska, blaming the ship's captain for the disaster.

Oil giant ExxonMobil yesterday urged the US Supreme Court to cancel a $US2.5 billion ($2.67billion) compensation award for the 1989 Exxon Valdez spill in Alaska, blaming the ship's captain for the disaster.

The US judges appeared to be divided on the case, which has dragged through the courts for nearly 20 years.

They seemed unpersuaded by Exxon's argument that the special nature of admiralty law precluded punitive damages against Exxon. But several of the judges seemed concerned that, under the plaintiffs' theory, punitive damages for maritime accidents might face no limit.

Among the issues to be weighed is whether Exxon can be punished under maritime law for the actions of the ship's captain, Joseph Hazelwood, who, against company rules, had left the deck while on duty.

Prosecutors also maintained that Mr Hazelwood was drunk when the ship ran aground on March 24, 1989, although he has denied the charge and was acquitted in criminal court.

Exxon lawyer Walter Dellinger argued that the company should not be expected to pay billions of dollars in penalties "simply because, against its policy rules, Mr Hazelwood left the deck". But Jeffrey Fisher, a lawyer for the plaintiffs, said the company was responsible for the actions of its employees.

The Exxon Valdez oil tanker hit a reef in Prince William Sound and spilled 11million gallons of crude into Alaskan fishing waters. It was the worst oil disaster to hit the US, polluting 500km of coastline and killing tens of thousands of birds and hundreds of sea otters.

ExxonMobil spent about $US2.1billion cleaning up the polluted coastline and more than $US300million compensating fishermen and locals.

The court will decide on damages after July.

This news is a total 1137 time has been read