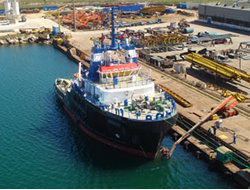 To sail under the flag of Antigua and Barbuda, "Fairplay-33" is the strongest tug in Fairplay"s fleet. The tug will be employed for offshore work as well as for long distance tows.

Both "Fairplay-33" and her identical sister "Fairplay-32", still under construction and due for delivery mid-September, were originally ordered at Daewoo Romania by a Hamburg-based family. Early in 2011, the owner and Fairplay Towage agreed to jointly operate these tugs. Fairplay bought "Fairplay-33" from its partner and will take over the full management of "Fairplay-32"

Two MAN STX engines (Type 6L32/40), each of 3,000kW at 750rpm and two Lips controllable pitch propellers with a diameter of 3.20 metres in Kort nozzles are expected to produce a bollard pull greater than 100 tonnes.

Two shaft generators with an output of each 640kVa, two KTA19DM1GA Cummins auxiliary engines, each 390kW, as well as a Cummins 6BT5.9DMGE generator of 90kW generate electrical power on board.