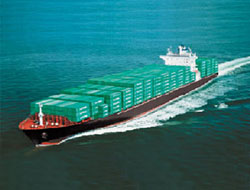 Shipping costs for raw materials usually peak during winter, re-energised by rising utility demand for coal and the start of the American grains export season. But key freight indices are in reverse with fading prospects of a bounce.

The Baltic Exchange's chief sea freight index, a price gauge of major export routes for resources excluding oil, has dived to a more than a two-year low from a record high struck in May.

The drop has got steeper in the last week as the worst financial storm since the 1930s, which has toppled banks, hammered stock markets and hit oil prices, saps confidence.

Container shipping, another industry sector, which ferries finished goods from electronics to toys has also taken a battering, especially on key routes from Asia to consumers in the West.

"There's a considerable slowdown in container trades for manufactured goods to Europe and the United States from Asia," said Philip Damas, director of research at Drewry's ship consultancy in London.

"As a result of the financial crisis we are seeing consumers buying less clothes and furniture and we've even got the start of bankruptcies for furniture importers," he said. Furniture trade from Asia is a key export marker.

Damas said container trade growth had fallen to its lowest level ever from Asia to the United States this year, and was at a 15-year low from Asia to Europe.

"What you've got is a collective loss of confidence, not only in shipping, but across a whole range of sectors which is a barrier to activity," said John Kearsey, executive director at Simpson, Spence & Young ship consultancy.

"So a lot of importers, trading firms and charterers seem to be standing aside with this wait-and-see attitude that may have exaggerated the speed of decline," he said.

The Baltic index, which is heavily exposed to emerging economies in Asia, particularly China, suffered its biggest percentage fall in its 23-year history last Friday.

Three more of its biggest one-day drops have occurred in little more than a week.

Shares in Singapore's Neptune Orient Lines, Japan's Mitsui OSK Lines, and China Cosco have fallen at least 50 percent since the freight record in May.

Moreover, the freight slide is fuelling concerns that the Asian export-led model of economic growth is cooling fast, with banks betting increasingly on the downside.

In its quarterly commodity report this week Deutsche Bank said the Baltic's index has been good at predicting global growth cycles in the past. Both boom and bust.

It said its indices are driven by Asian export growth that could slow from "just over 20 percent currently to zero growth" if the global economy were to deteriorate further.

"If you haven't got that stimulus from the exports sector it then feeds right back to industrial production and demand for raw materials," Kearsey said.

"We do not expect the majority of these factors to reverse in a deteriorating macroeconomic environment," analysts at Deutsche Bank said.

"While we expected a summer slump in rates...we did not expect the Baltic Dry Index to fall this much amid relatively benign (fleet) supply growth," said Tom Kim, an analyst in the bank's Asian division.

Industry experts say world fleet growth, now moderate, is due to accelerate in 2009 and balloon in 2010, pressuring freight prices further.

The financial crisis could have a silver lining for shippers, at least in the long-run.

Analysts say a clampdown on credit could mean that ship owners might not be able to finance their ambitious expansion plans, curbing hefty fleet growth.

In the short -term, any rebound in earnings for shippers will depend on whether China begins hoovering up iron ore again.

"If that doesn't happen, and the credit crisis worsens taking liquidity out of commodity markets, we won't get a rebound," Kearsey said.